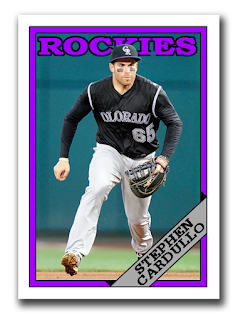 A small tribute to the recently released Stephen Cardullo in the form of 1988 Topps. Cardullo was signed by the Rockies before the 2016 season after 4 years of independent league baseball, winning the Canadian-American Association MVP in 2015. He eventually earned a call-up and hit two home runs, one in each game of a double-header, on his birthday (disappointingly no Topps Now cards though). Earned a spot in the 2017 roster mostly due to Ian Desmond being hurt. Not a household name, but a great story, Purple Row recently has a great article on him that is worth the read.
Posted by Rosenort at 09:35