I never shy away from ordering from Japan, for some reason packages come faster and cheaper from across the ocean than from the States. The latest one started with the last 3 Rockies I needed to complete the 2013 Sega Card-Gen team set. The now former Rockie Micheal Cuddyer, along with a 7 star Carlos Gonzalez and one star Chris Nelson, who has bounced around the majors since leaving Colorado. With combined shipping being offered it was time to check for any other interesting goodies, and a couple were found.
Read more »
Posted by Rosenort at 20:19 1 comment: 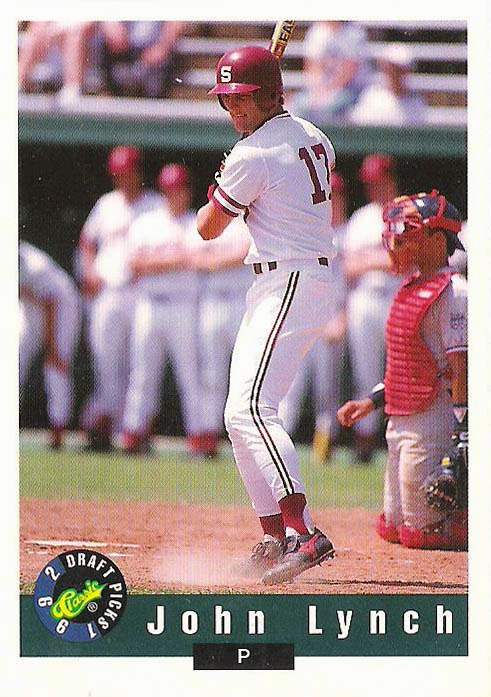 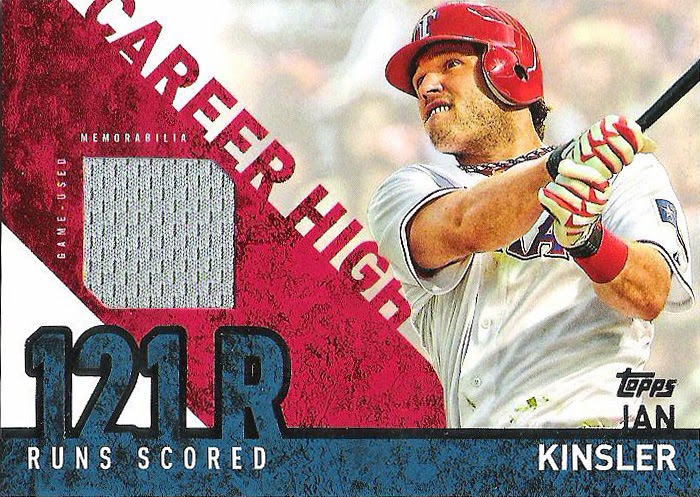 I usually head to the LCS for supplies and end up with a few random packs, but this time packs were Topps (get it) on the list. People are probably bored of base cards so I will lead off with the hit, an Ian Kinsler Career High Relic, listed at 1:49 packs, I was pretty luck to pull this out of one of five.
Read more »
Posted by Rosenort at 14:54 No comments:

Breaking the Seal on 2015 Topps 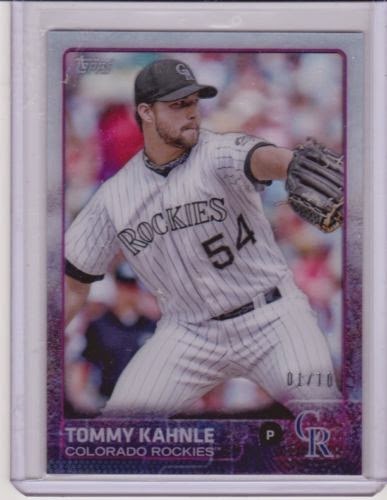 This weekend looks like the soonest that I will physically get my hands on any 2015 Topps, but I have started with a few saved searches and made one purchase so far. I really can't explain why I am drawn to more obscure players, but the only player I really wanted to collect out of 2015 Topps was Tommy Kahnle. When one of his acetate cards popped up with a reasonable "buy it now" price, I couldn't pass it up.

A Rule V pick-up from the Yankees, Kahnle stuck with the Rockies all season and lead the team with 68 2/3 innings out of the bull-pen, and had a 2.62 ERA from from April until the end of July before a few roughs outing and a trip to DL left him with a 4.19 mark on the year.

Posted by Rosenort at 16:39 No comments: Kind of a bitter-sweet card in Daniel Winkler, who started 2014 with Double-A Tulsa, and proceeded to go 5-2 with a 1.41 ERA over 12 starts, with a 9.1 SO/9 and 2.2 BB/9. The previous season Winkler was just as good with a 13-7 record, 2.98 ERA and 10 so/9 across two levels. Pretty exciting to a pitching starved franchise like the Rockies. Then he hurt his elbow, resulting in Tommy John surgery in June, and then in December was selected by the Braves in the Rule V draft. There is a chance he will be back with the Rockies if the Rule V thing doesn't work out, or maybe he will be a star with the Braves, hopefully he recovers and can continue his career no matter which organization it is with.
Posted by Rosenort at 15:44 1 comment: