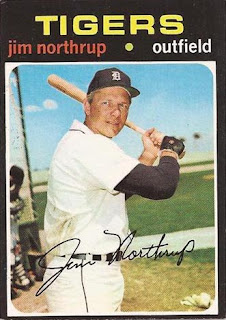 Another in the series of 1971 Topps variations, card number 265 Jim Northrup. This card has at least two variations and maybe three. There is the version to the right with a small black dot to the right of his hands, then it seems like someone wanted to remove the spot from the printing plate and it resulted in a large smudge (after the jump). There are versions of the smear that are a dark black and versions with a lighter grey smudge, but I would think these are more of a printing error rather than a true variation. The Blob/No Blob variations are noted on most graded versions of this card. All three versions can be found after the jump.