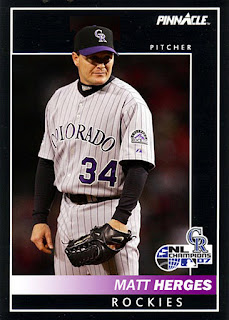 There is just something about black borders that I just love, 1992 Pinnacle is right up there with my favorite set designs of all time, and as an added bonus the same design was used for the football and hockey sets of the same year, but I think the baseball set looks the best as really focuses on the player without much background shown. Matt Herges played in 567 MLB games over 11 seasons but being a middle reliever only has a handful of cards, none of which are with the Rockies. This custom fills a spot in my 2007 N.L. Champions team set, replacing a 2002 Bowman of Herges with the Dodgers. Herges was huge for the Rox in 2007 going 5-1 with a 2.96 ERA over 35 games, then pitching 11 1/3 innings in the playoffs without giving up run and picking up the win the clinching NLCS game four over the Diamondbacks.

Card back after the jump 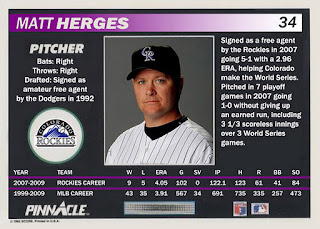