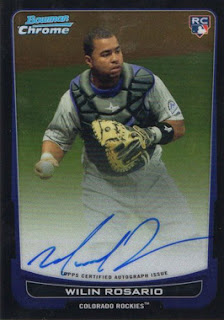 No it's not the hyped up Bryce Harper, Mike Trout, Yoenis Cespedes or Jesus Montero. Right now baseball's rookie home run leader is Rockies catcher Wilin Rosario, as well as the rookie leader in RBI until Will Middlebrooks passed him this weekend. Rosario has been a highly regarded prospect for a few season, but this season with the injury to Ramon Hernandez, Rosario has taken the starting job and ran with it. He still suffers from "Pedro Cerrano Syndrome" (Straightball I hit it very much. Curveball, bats are afraid.) but his defense is improving and he looks like a star in the making. His handling of the pitching staff has improved even though Rockies pitching has been putrid this season. He still needs to work on his on base numbers and strikeouts (7 walks to 45 strikeouts) but he is still young and has the raw power to do big things. I picked up this nice on card auto about a month ago, now seemed like a good time to show it off.
Posted by Rosenort at 11:00