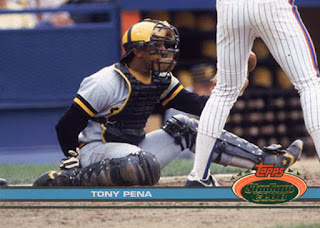 After getting back into cardboard there have been two things I have been looking for on cards that I remember from baseball when I was a kid, one is Mickey Tettleton in his weird batting stance that I have tried to duplicate in our Slo-Pitch league. The other is Tony Pena in his one leg out crouch. I don't really remember any other catchers adopting this method (other than my dad trying it our men's league) which was meant to give pitchers a lower target. I finally got around to finding a picture and making a custom, I really like that he is in the pirates uniform for this one, something about that yellow helmet is classic.
Pena does have a card in the 1991 Stadium Club set with the Red Sox, the original card comes the closest to showing Pena in his unique stance, but it's weirdly cropped and he doesn't have his mask on in what looks like a spring training shot, a rare sub-par photo in a stadium club set. 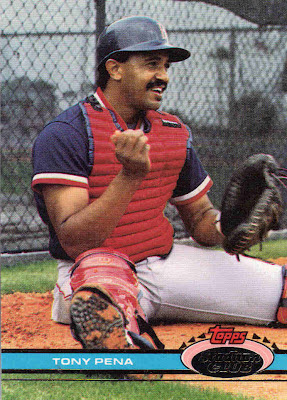 Pena had a pretty impressive career, a 5 time All-Star, 4 time Gold Glover and the second player ever to win a Gold Glove as a catcher in both leagues, and right now is 6th All-Time in games caught. He probably has his best season in 1983 for the Pirates, hitting for a .301 batting average and finishing 12th in the N.L. MVP voting. One thing I did not remember is that he won A.L. Manager of the Year in 2003 with the Royals.
Posted by Rosenort at 11:59