Trip to the LCS: 2012 Prestige Football 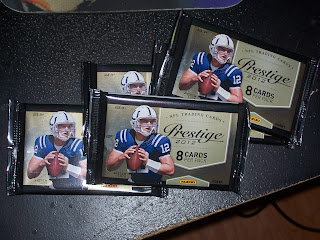 This weekend I made a very rare trip to the local card shop, and I use the term local loosely. The nearest card shop is about 150 km (about 100 miles) of Saskatchewan prairie away, so I get most things through mail order. I needed some card boxes for storage and to aid in an upcoming move so I stopped in while I was in the big city. Being a baseball collector in a hockey obsessed country is not easy, the Walmart only has base Topps blasters and hanger packs and the LCS had packs of 2012 Topps series 1 & 2 as well as a box of 2012 Bowman, both sets I am not collecting. I asked if they got any Gypsy Queen this year and the guy asked if it was even out yet. I can't blame the guy, he has to bring in what sells and baseball doesn't sell here. There was something that caught my eye and that was 2012 Prestige football. I try and stick to baseball just to stay in my budget, but I felt like a douche just buying supplies so I picked up 5 packs of Prestige just to feel out the product (as well as another purchase I am saving until tomorrow). I was blown away at how nice the design was and have covered it before on here with some custom baseball designs. Here is what I pulled.

First a few of the base set, I love this design, the strip does limit the photos a little bit, but Panini makes it work. I do not like the old uniform new team thing (see the Peyton Hillis Browns jersey, 49er's card). They were really promoting the Manning and Tebow in new uni's, why not do it for everyone, it looks really bad on the Pierre Garcon blue Colts uniform and burgundy Redskins strip. Other than that really great base design. 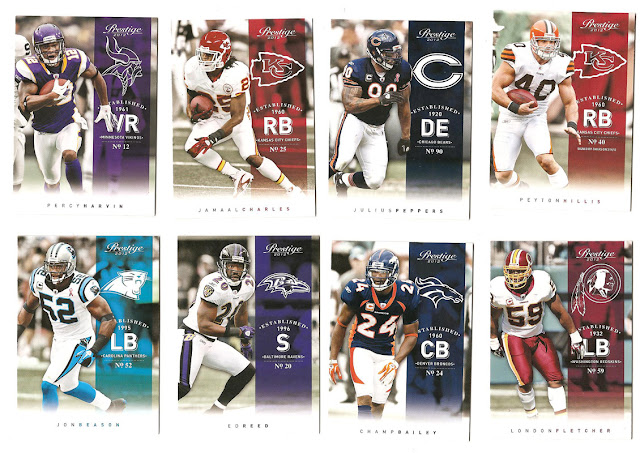 The big selling point is the short printed Rookie cards, I didn't get lucky enough to get a Griffin or a Luck, but I did get 7 rookies from my 5 packs. 5 out of 7 are first round picks and 2 were the Gold Extra Points parallel. Not a fan of Extra Points parallels, the kind of take away from the white gradient on the design, but a very small complaint. 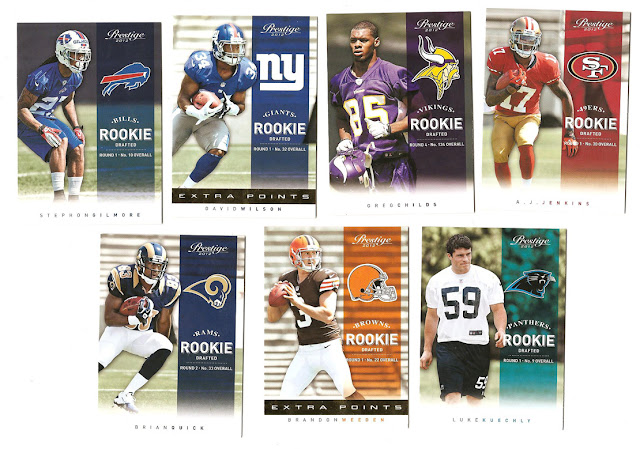 On the the inserts, the Stars of the NFL cards look great, and the Prestigious Picks look ok even though I don't care for horizontal cards, the Draft Tickets I am not a fan of, but there is only so much you can do with players that have no in game photos yet. I did get lucky enough to get a hit, a Brent Celek "Prime" jersey, not sure what the deal with the Prime versus regular gamers is but a hit is always cool. 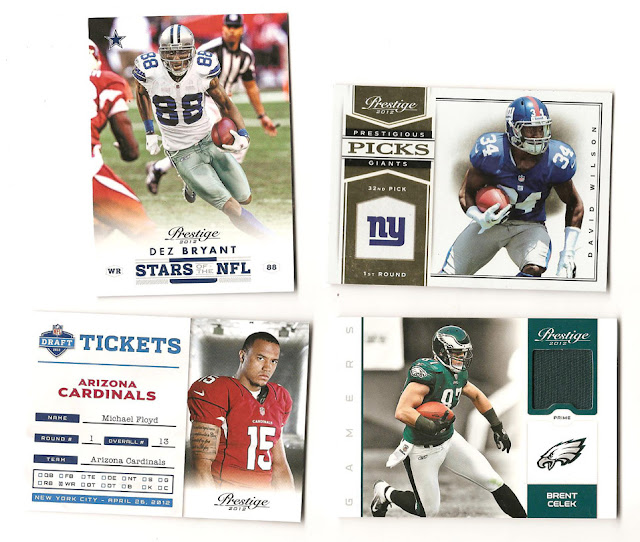 Overall really nice cards, the 100 short print rookie cards are nice but would make building a full set pretty expensive. My biggest complaint was that I only got one Redskin and all my inserts are NFC east (or former NFC East with Arizona) rivals to go along with 3 Cowboys cards. Inserts are for trade if anyone is interested.
Posted by Rosenort at 10:50