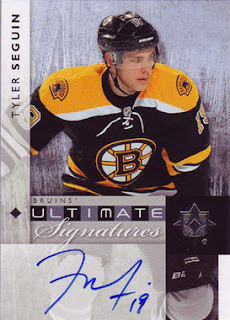 This is one that has eluded me for a while due to Seguin autos going for high prices, but this one was reasonable (30 bucks shipped) so I jumped on it. The Bruins drafted Tyler Seguin 2nd overall in the 2010 entry draft with a pick acquired in the Phil Kessel trade. He spent his rookie season with the Bruins and finished with 11 goals and 11 assists. After being a healthy scratch in the first two round of the 2011 playoffs, he earned his place in Boston Bruins lore by scoring a goal in his playoff debut, game one of the Eastern Conference finals, then scoring 2 goals and finishing with 4 points in his second game. Seguin would only pick one more point in the playoffs, an assist in Boston's game 4 win against Vancouver, but would end his rookie season by raising the Cup above his head. In 2012 Seguin would lead the Bruins in goals with 29 and points with 67 and looks to be a star for Boston when the NHL eventually resumes.
Posted by Rosenort at 11:00