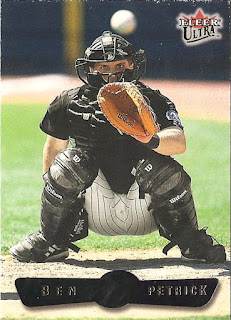 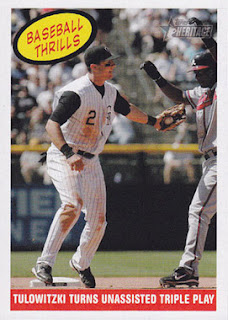 20. Troy Tulowitzki - 2008 Topps Heritage #367
Another "moment in time" card, this one marking Tulowitzki turning an unassisted triple play against the Braves on April 29th, 2007 (boxscore here) becoming the 13th major leaguer and the only Rockies player to do this. In 2009 Tulowitzki hit for the cycle, becoming only the second player in history to turn an unassisted triple play and hit for the cycle in their careers. 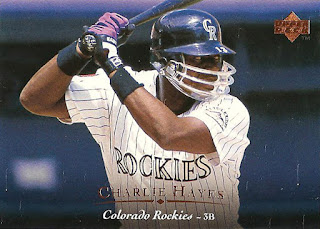 19. Charlie Hayes - 1995 Upper Deck #172
A card that was already featured in it's own post, I love 1995 Upper Deck and the football style mask makes this card pretty unique. 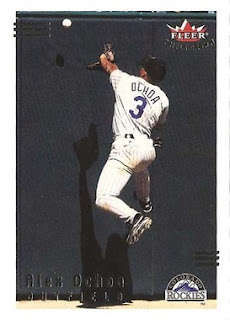 18. Alex Ochoa - 2002 Fleer Triple Crown #115
Ochoa only spent 2 1/2 months with the Rockies, playing in 58 games, but he makes the list with this action photo of a play at the wall. There is something that I like about cards that show the players number on the back and this falls into that category. 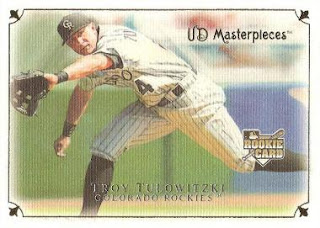 17. Troy Tulowitzki - 2007 Upper Deck Masterpieces #34
A card with the Rookie Card logo, but not a rookie card as Tulowitzki was in the 2005 Bowman Draft set. Tulo's true rookie is a boring head shot so this makes the list in it's place. Masterpieces is a much beloved set from what I have seen and it's kind of different that it has Troy wearing number 14, before he switched to number 2. 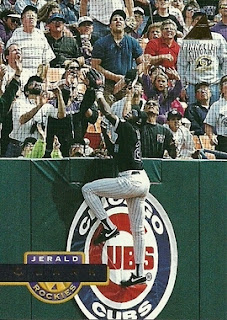 16. Jerald Clark - 1994 Pinnacle #103
Another nice action photo of an outfielder making a play at the fence in what could be Mile High Stadium before Coors Field was built. Jerald Clark was an original Rockie being selected in the 7th round of the 1992 expansion draft. He was the opening day starter in left field in the first Rockies game and played in 140 games for Colorado in his only season with the club. 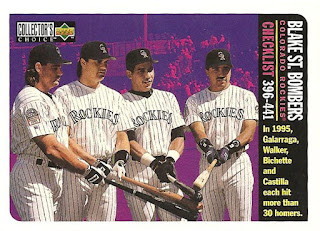 15. Blake Street Bombers - 1996 Collector's Choice #753
This card might be a little low on the list, as it features four of the best players in the Rockies short history. In 1995 all four topped 30 home runs, Dante Bichete with 40, Larry Walker with 36, Vinny Castilla with 32 and Andres Galarraga with 31 helping the Rockies to their first playoff berth. Making this even more impressive is that 1995 was a season shortened to 144 games by the 1994-95 strike.