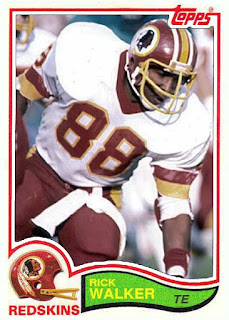 My first custom football card, Rick "Doc" Walker played in 119 career NFL games, 88 of those with the Redskins and never received a card in any official NFL product. A member of the 1982 Super Bowl XVII Championship team, set career highs with 17 catches, 168 yards and 2 touchdowns in 1983. Made his mark along with Don Warren as blocking Tight Ends in Joe Gibbs power running game and is an member of the Hogs.  Probably better known to Redskins fans for his broadcast career working as the Redskins radio sideline reporter among other Redskins related broadcasts.
Posted by Rosenort at 11:14