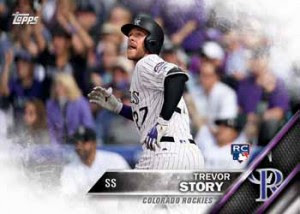 Update is usually my favorite of the flagship releases, as a team collectors there are usually new Rockies cards of either rookies or new guys. It's still a couple months away but I have been thinking about what I would like to see in Update this year.

Tony Wolters - The Rockies rookie catcher has been in the MLB roster all season, and is having a better year than Nick Hundley who plays more possibly because of "veteran-ness" and possibly because Walt Weiss is a terrible manager, or a combination of the two. Wolters is good behind the plate and is becoming a favorite of mine, which means he will be traded in the off-season.

Dustin Molleken - Became the 9th MLB player from Saskatchewan, I doubt Topps will bother with a 31 year-old rookie relief pitcher with 4 games under his belt, but I can hope.

Drew Pomeranz - I loaded up on his cards with the Rockies, and have kept up a little with the A's and Padres cards, would be nice to add a card of him with the Red Sox.

Tim Lincecum - Starting to look like this would be a sunset card in an unfamiliar Angels uniform. Even though the Giants make me puke, I always had a soft spot for Timmy.

Justin Miller - My pick for obscure Rockies reliever in the set, if not for just another beard card.

Nolan Arenado Topps Laser - I really like the looks of these booklets and would love to have a Rockies one, Arenado is the obvious choice, but any Rockie would do.

Rockies in the Retail Exclusive Rookie cards - From the sell sheet, 2016 rookies printed in the card of their birthyear. So we could have a 1991 Topps Jon Gray, or a 1992 Topps Trevor Story.