I don't do group breaks very often, mostly because they are never with the gamble. Sometimes I forget this though and enter a group break just to remind myself how much they are not worth it. Here is my latest reminder in the form of 2017 Panini Unparalleled. I bough the Redskins in an 8 box half-case break, here is what I got.

Four veteran base cards, the thing that really sold me on this product was the crazy design, parallels and the checklist that featured a lot of players that never had cards before. I have to say I am pretty disappointed that Junior Galette is in a Saints uniform, I know that was the last team he played with, but that was 2014, they couldn't find at least a training camp photo with the Redskins? 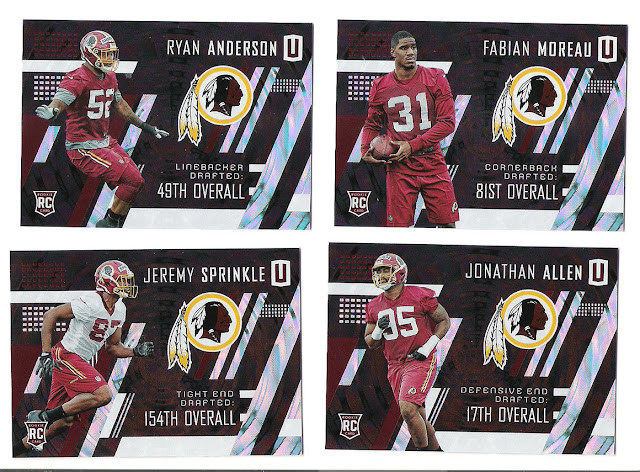 The other selling point was the larger rookie checklist with most of them being autograph, I was blanked on the autos, but got a few rookies needed for the One of Every Redskins pc.

Four veteran parallels, the Spencer Long is a "Small Hyperplaid" numbered to 99. Will Compton was the player I was really chasing here, my lone card of his is "Wedges" parallel. 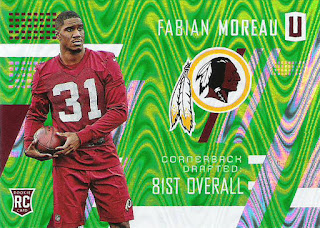 and a "Swirlorama" numbered to 499, I didn't get much value out of this break, but these cards are really cool. 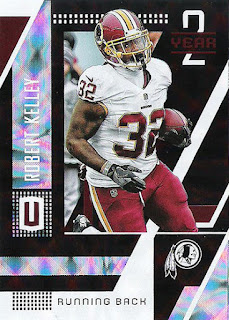 and the only insert I got, actually I got two of these, "Fat Rob" Kelly in a Year 2 set. Not a lot of valve, but some nice looking cards and some names crossed of the Redskins checklist.