Not Your Regular Rookie Card Mailday 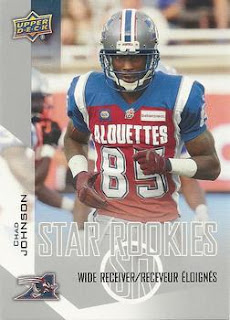 Near the top of the list of sets I will probably never finish is 2014 Upper Deck CFL. I finished the base and the 100-150 sport prints, but the 151-180 Rookies falling at 6 per box have been hard to find for a reasonable price. A recent online lot of 9 cards checked 4 off my list (I thought I needed more of them, but my collection is still in a post-zistle, office reno mess). The most interesting is the Chad Johnson, a 36 year old Rookie and veteran of 11 NFL seasons, Johnson played in 5 games, caught 7 passes including a touchdown, while struggling with injuries and not being a star anymore. 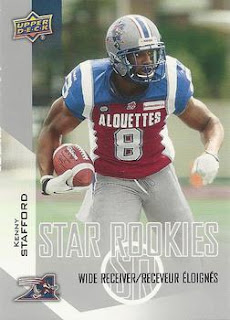 Kenny Stafford has bounced around the CFL after spending time on several NFL practice squads and the Arena League. 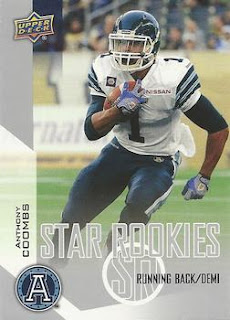 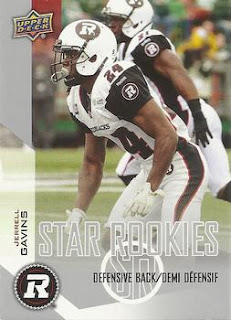 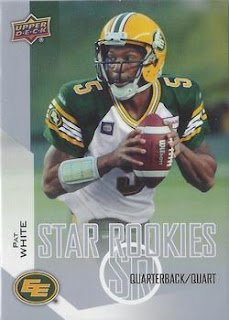 Pat White who only lasted one season as a back-up. I only really remember him with the Redskins in the pre-season. 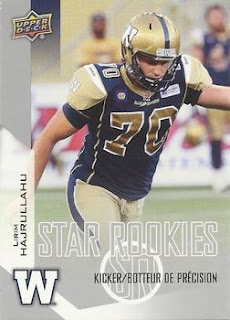 This one was a double, but I never pass up the chance to show a kicker card. Lirim Hajrullahu, probably the only football card I have of a guy born in Kosovo.
Posted by Rosenort at 13:53