A Fool and His Money (will buy Topps Now Cards) 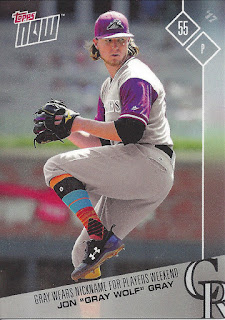 Something about Topps Now does not sit well with me. I love what I call "Moment in time" card, and these are exactly that. 1997 Upper Deck did a great job of this with little notes as to what game to picture is from. But something about Topps Now seems greasy, like Topps is has a license to print money (and fully capitalize on the Aaron Judge phenomenon) and is taking advantage of collectors. Case in point, this was a 5 card set for $20 or 4 bucks a card. This set was limited to 78 copies, so it is low numbered, but 4 bucks a card is more than I like to spend, but spend I did. (I also bought the postseason set so I am a total hypocrite). One of the big reasons was the The Rockies don't mess with their jerseys, and these focus on a pretty big change, even if its for one weekend (and they do look like pajamas) 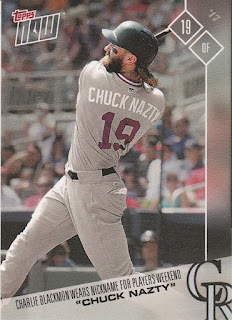 "Chuck Nazty" wins the nickname of the set, close second Pat "Patty Barrels" Valaika didn't get his nickname on his jersey and is not famous enough for a 5 card set. Gray Wolf is pretty good, better than most, but not great. 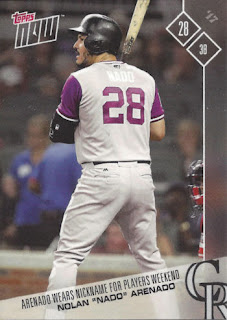 "Nado" is not a nickname, it is just his last name, only with letters missing. Sadly "Sandblaster" hadn't caught on at this point, and might have already run its course. White letters on grey uniforms seems like a mistake as well. 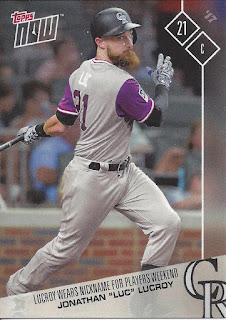 The other driving factor in buying this was Jonathan Lucroy's first Rockies card, he will have more, but I collect catchers so it pushed me in that direction. Also "Luc" is not really a nickname if it is just your last name, only shorter. 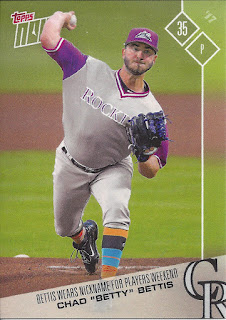 I feel like the worst of the bunch is "Betty", this Player's Weekend thing really showed how lazy people are with nicknames, gone are the days of "High Pockets", "Charlie Hustle", "Shoeless Joe" and "Oil Can Boyd" and in their place we have Betty and Chatty and Nado.

Also, THE ROCKIES ARE IN THE PLAYOFF AND PLAY TONIGHT, GOD I HOPE THEY BEAT ARIZONA!!!!
Posted by Rosenort at 16:22