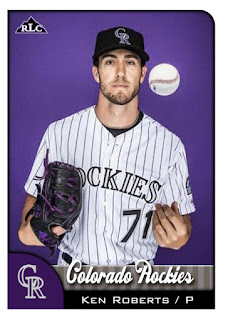 The Player: Ken Roberts was drafted by the Rockies in 2010, worked his way up the system and eventually made his MLB debut in May of 2015. He pitched 13 2/3 innings over 15 games with a 7.24 ERA. In August of the same year he was selected off waivers by the Phillies and would pitch in 6 games with Philadelphia earning his first and only MLB win.

The Card: 2007 Fleer is not the most memorable set, but it fit well with the purple background and actually kind of a nice design when you really look at it.

The Project: Rockies Legacy Collection custom project to make digital cards of Rockies players who never had one issued.https://condition-sensitive.blogspot.com/2018/03/rlc-custom-card-project-main-page.html
Posted by Rosenort at 17:47