Another glorious COMC mailday with a good amount of mailbox submissions. My new obsession, Panini Super Bowl Signatures. Starting in 2015 these were inserted in products, often unannounced, and continuing into 2019, all sharing the same design and all on-card. The Mark Rypien is new for 2019 and one of my favorite cards of the year, Mike Alstott was probably my favorite non-Redskin going back to his Purdue days, so picking on an on-card of a Hall of Fame fullback is a nice add. The Charles Mann is from 2015 and knocks my Washington needs down to two.

More autos, all on-card again, another Hall of Famer with Champ Bailey, a great looking card for a reasonable price, another Mark Rypien and Terry Mclaurin, who looks decent among the mess that is the 2019 Redskins.

The last of the Redskins with John Riggins for the weird Enor updates to the original set, Pat Palmer for the One of Every Redskin and a shiny new Bryce Love 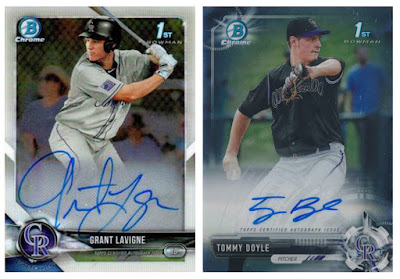 A couple Rockies prospects, Grant Lavigne was high priced last year, but has come down and Tommy Doyle for 75 cents was too good to pass up. 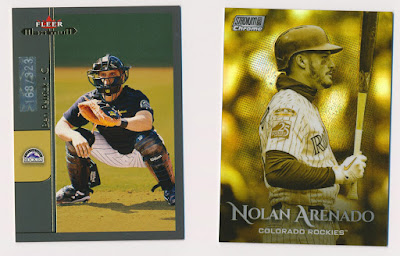 Some random baseball, a Gypsy Queen short print, a very Random Lance Perishable from Flopps which was a weird Pro Set offering, and Pablo Sandoval for the position player pitching collection.

Finished off by a few hockey, short-term stop Marcus Johansson and a classic 80's goalie on a modern card in Rogie Vachon, back when a plain white mask looked just a good as painted.