Hey, I posted something. (Its a trade package) 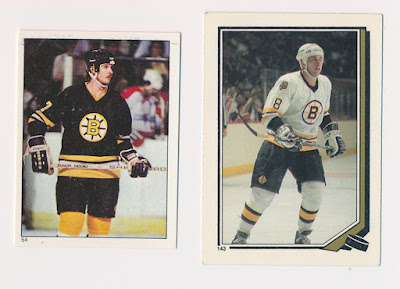 Summer is a very busy time around here and looking back there were a lot of things I got that I never posted, mostly because I let them pile up to an unmanageable point, then put things away without scanning. So for everyone that sent something that I didn't post, it is always much appreciated and just due to my own negligence. That aside, here is a post. Starting with some sticker from Panini back in the day. I don't usually do stickers, but we have Marty Howe who never got a real Bruins card and a new Neely, so both were wanted. 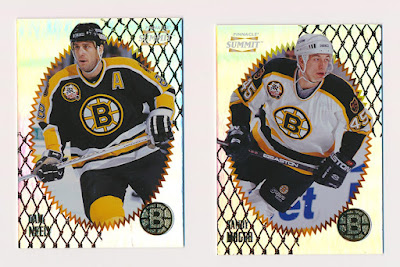 Shiny Bruins, including another new Neely and Sandy Moger from the obscure guys I collect collection.

Nick Boyton with a Rookie Cup and a couple more obscure Bruins in Cameron Mann and Shawn Bates.

Brian Leetch from his farewell season spent in Boston, Martin Biron sporting the 00 uniform number and Alexei Kasatonov who didn't spend much time in Boston, but was one of my favorites while he was there (I still wear #6 when I play).

A few random hockey guys on weird teams highlighted by Tommy Salo from his 5 game stop in Colorado.

A few frankenset runners up, Mark Duper with a photo from around 1984 on a 1992 card, Doug Dieken with the sweet trucker hat, and Clarence Harmon that I needed for some reason.
Posted by Rosenort at 20:06