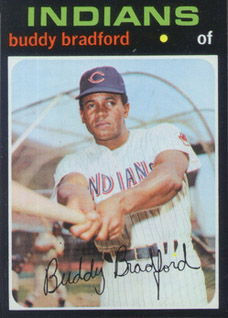 This is Bradford's first card with the Indians after being with White Sox from 1966-1970. Never played a full season for Cleveland, coming to the Indians in June of 1970, then going the the Reds in May of 1971, before returning to the White Sox in March of 1972. Overall he playing in 697 career MLB games (473 of them in 3 stints with the White Sox), finishing with 52 home runs, 175 RBI and a .226 batting average. Mostly used as a reserve outfielder, never starting more than 100 games in the Majors, finished his career playing in Japan in 1977.