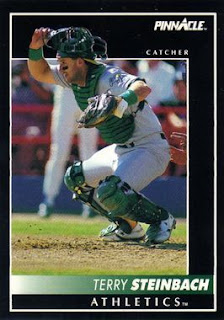 Topps is in their second year of baseball monopoly, and while I am not hating on Topps I do miss the other products, looking back the one I miss the most is Pinnacle. 1992 was the first year of Pinnacle baseball after producing football and hockey sets in 1991, with both sets sharing the same design. 1992 added baseball and shared the same design with hockey and football. 1992 Pinnacle remains in my top 5 set designs of all time. It was Score's higher end product but still suffers from overproduction with the most valuable base card being the Manny Ramirez rookie which books around $4.00. I love the black borders and the nice simple design with the team color gradient adding some color, but nothing garish. The lack of team logos might turn some people off but I would rather them left off than have then intrude on the design. The photo selection is decent and appealing to me is a lot of the catchers are featured with there gear on, which I love.

One of the subsets featured '92 rookie prospects with a logo added giving us rookie cards of Matt Stairs, Scott Brosius and Jeff Kent among others. 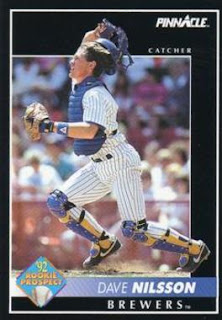 Along with those there is a Draft Picks subset which featured a head shot of draft picks from the 1991 draft featuring Manny Ramirez and a bunch of guys no one has heard of or remembers. 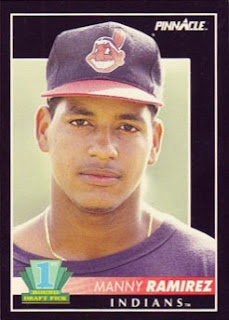 Idols featured players and the guys they looked up to as kids, the Ventura/Gehrig is by far the coolest as the rest feature current players as both the idol and the admirer. 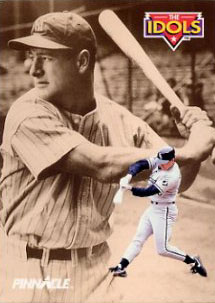 The Sidelines subset doesn't do much for me, but was an interesting idea, the highlight is probably John Wetteland about to melt some faces with a deadly riff and John Burkett bowling. 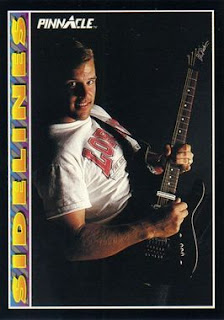 Series one closes with the "Shades" cards, and they return in series two, it sounds like it might be a good idea, but I don't think it fits with the rest of the set, honestly I think these are terrible, but hey, it was the 90's. Highlights include 90's sunglasses and well groomed facial hair. 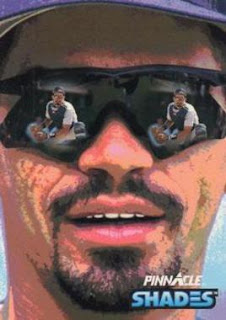 Series 2 added "The Grip" subset, one of the coolest things ever on cards, pitchers showing how they grip certain pitches and then explain how they throw the pitch. I never pitched much as a kid, but this is and awesome idea, love these. Highlights include Randy Tomlin's Vulcan Chance, and Tom Candiotti's Knuckleball. 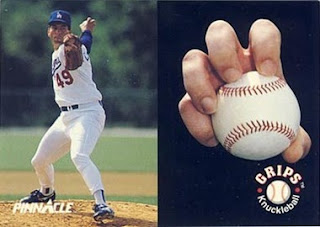 Finishing Series 2 was the "Tech" cards, made to look like a blueprint breaking down baseball reality things,I really dig the Santiago card. 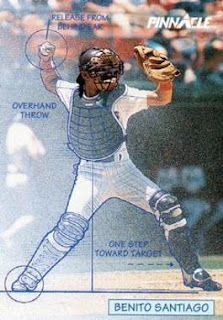 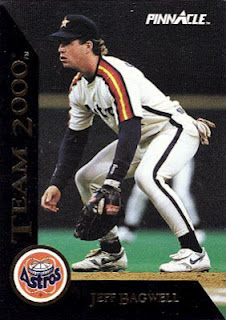 Rookie Idols is a series 2 only insert that is a play off the Idols subset from series one, featuring rookie and their idols. My highlight is the Hundley/Munson card. 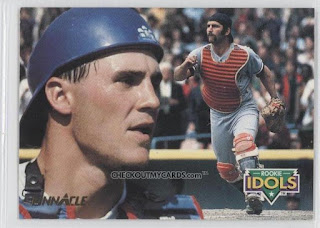 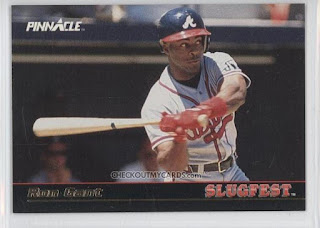 There you go 1992 Pinnacle, I am planning to go all the way to 1998 giving some subject matter for slow weeks.
Posted by Rosenort at 13:10