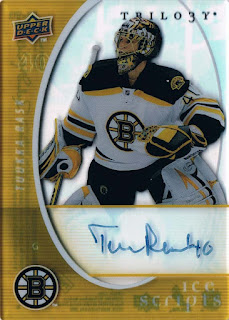 Of all the cards I have acquired in my Bruins Stanley Cup Auto, this is by far my favorite, a 2008-09 Upper Deck Trilogy Ice Scripts Tuukka Rask. I love acetate cards and have never seen one this thick before. The graphics are on the front and back of the clear card giving a slight 3D effect. Hockey seems to have embraced the clear cards while baseball has sampled in it but I haven't seen anything new for a while as it doesn't seem like it's something Topps is interested in.

After playing all 13 games in the 2010 playoffs, Rask has sat for the last two playoff years, including not seeing a minute of time in the 2011 Cup run, but being the second string goalie gets your name on the Cup. Rask has performed well when called upon over the past four seasons and will get a chance to prove he's a number one Goalie with Tim Thomas taking 2012-13 off.
Posted by Rosenort at 10:22