Box number two was a little kinder than the first box. Most of the big rookies were in this one with a
Hyun-jin Ryu refractor, Wil Myers 1972, and base cards of Puig, Gattis, Arenado, Jose Fernandez, and Myers. Pulling a Tulowitzki die cut is always nice for a Rockies fan. The color consisted of two Sepias and a blue Melky Mesa. I had actually heard of Darin Ruf, so that a step up my from first box's autos, but the second auto is a redemption, numbered to 499 of a Reds prospect that will probably go on eBay.

My two box total put me at 145 of 220 (with 4 dupes), leaving me 75 cards short of the base set. The decision I have to make now is to either track down the rest of the set, or just use them as trade bait. Another box would bring me close, but I pre-ordered these and got them for just over $60.00 a piece and they seem to be around $80 right now, which is more than I want to spend. 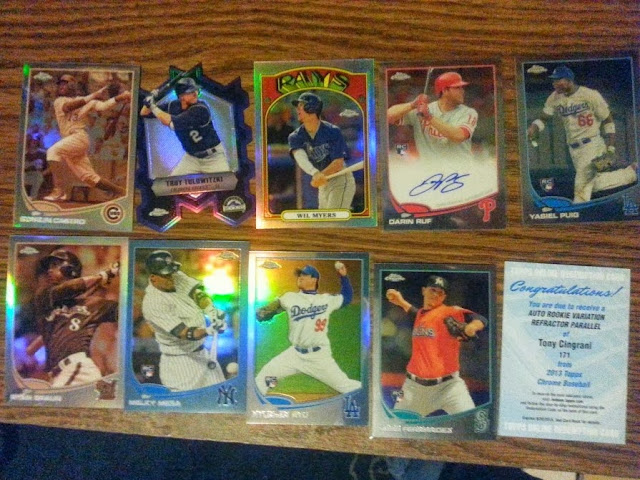