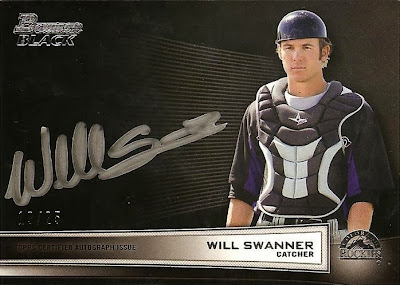 After a recent COMC package arrived, I thought a few cards deserved to be highlighted here. First off this Will Swanner Bowman Black Collection from ebay via the COMC Mailbox service. Just a beautiful card on thick stock, numbered to 25, featuring a Rockies catcher. I may have overpaid for this, but for such a nice looking card, it doesn't hurt that much. 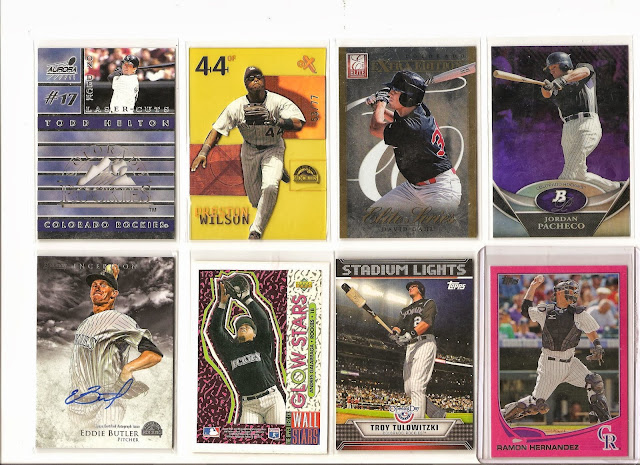 Starting at the top left, Todd Helton from the 1999 Aurora On Deck Laser-Cuts with a laser cut out Rockies logo, a cool card that a scan doesn't do justice. The Preston Wilson is a parallel from the 2003 E-X set, limited to 77, and a really terrible photoshop job. I don't even remember buying that David Dahl. What could be better than a purple parallel of a Rockies player, even if it is Jordan Pacheco. Another autograph with top prospect Eddie Butler from Bowman Inception, another really nice card on thick stock. The next two are glow in the dark cards, something I didn't even knew existed until a recent post at Baseball Card Breakdown. The last card is a Ramon Hernandez 2013 Pink parallel, a card that would have completed the rainbow, but Update has parallels from Series 1 and 2, so there is still 1 to go.