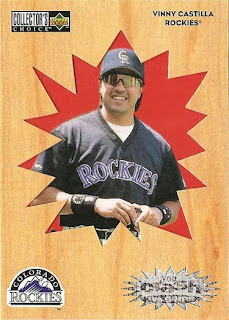 Collector's Choice was a product released by Upper Deck in the mid 1990's. One of the selling points of this line was the "Crash the Game" redemption/contest inserts. The cards featured players with specific dates and if the player hit a home run during that time the card was a winner and could be redeemed for a different card of the same player. In 1996 the inserts were a shiny/foily kind of thing, and the redemptions were acetate.

The design is very similar the Thunder Boomers inserts from 1998 Thunder with a wood grain border and the player photo in a broken out section. Of the 30 players in the set 27 of them have redmeptions, Tim Salmon, Larry Walker and Joe Carter didn't hit home runs on any of their redemption dates. The cards are kind of flimsy and fairly simple, but a pretty nice design for early acetate cards. 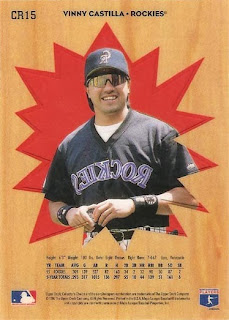