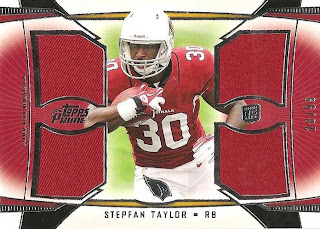 A trip to the local card shop for some supplies led to a few packs, as I don't want to be a guy that goes in, buys some supplies and leaves without really supporting the shop. Starting with the best pack of the bunch, the options are mostly limited to Hockey so after picking out a few baseball packs, I grabbed a pack of Topps Prime Football. For $10.00 a pack I was taking a gamble, and while not getting a huge hit, it was the best purchase of the day. A Quad Relic, numbered to 99, of Stepfan Taylor, a rookie for the Cardinals who has a total of 53 yards in 9 games played. At 4 hits per 10 packs I did ok on this, even though I have never heard of this kid.

The base cards are pretty nice, and I did ok with a Peyton Manning and Terrance Williams, a rookie having a pretty good season with the Cowboys.

The baseball was as always very limited, so I grabbed the last 4 packs in a box of Bowman Chrome 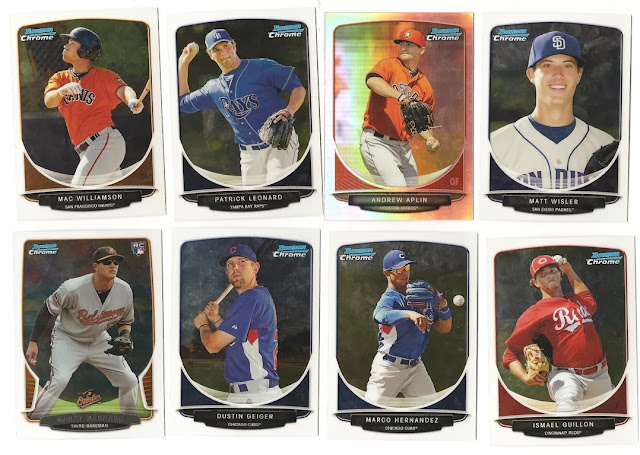 The highlight was a Manny Machado base rookie card and a refractor of Astros prospect Andrew Aplin.

Showing that I am a sucker for punishment, I grabbed 3 packs of Topps Chrome. After 2 crappy boxes I thought Topps Chrome owed me and there would something good in these packs, Topps Chrome thought otherwise. Despite still needing 75 cards from the base set, all the base cards I got were dupes. On the positive side, I did pull a blue refractor numbered to 199, a X-Fractor and another Gattis rookie.

All cards in this post are for trade.
Posted by Rosenort at 10:36