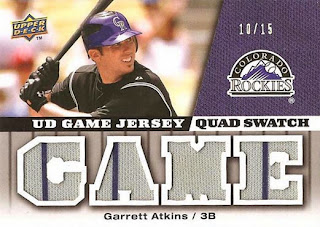 A trade I thought I had posted, but realized I had totally forgot about until Sportscards From the Dollar Store posted his side of the trade here. He wanted the Chrome Familia auto I pulled and I wanted the Nolan Arenado refractor he pulled and thus a trade was born. He sent along Garrett Atkins relic numbered to 15 along with some random cards.

Some Series 2 base I needed, and the Rockies refractors he pulled from his hot box. For some reason I forgot to scan the Arenado which was the one card I really wanted. And how can you go wrong with a Rockie, in catchers gear with a rookie cup.

Some Redskins, I think most of my Griffin cards have come from Buckstore cards, and the Helu was needed for the "One of every Redskin" project. 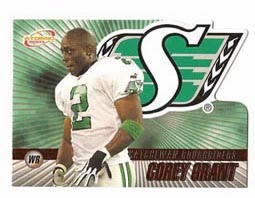 The big surprise was a Corey Grant Red Parallel from 2003 Pacific. Anytime I can add to my small Saskatchewan Roughrider collection, it's a good day. Thanks for the cards and the great trade.
Posted by Rosenort at 10:46