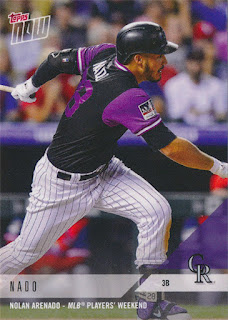 I bought this set last year when I didn't really like the Rockies road grey jerseys, but this year I really liked the home black and purple, so I didn't hesitate to pick up the set.

Although this year was not a straight forward as this year. Last year was a 5 card set. Simple. This year was a five card set, but if you bought 5 sets you got a bonus card and if you bought 10 sets you got two bonus cards. Fearing the cost on the secondary market, and the scarceness of some Topps Now Cards (I am still looking for the Neshek from last years post-season set), I was suckered into the ten sets and two bonus cards. So if anyone wants to buy a set from me, I have 9 for sale.

Also, like last year, the Rockies had a 6 game winning streak, so another bonus card will be on it's way, which is a plus.

I like the cards, but the checklist is downright horrid. Arenado is obvious in a Rockies set, no problems there. Although I wish he would adopt the "Sandblaster" nickname. 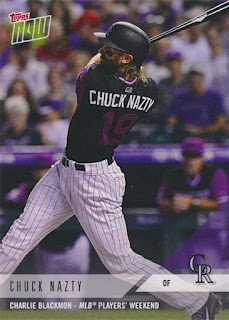 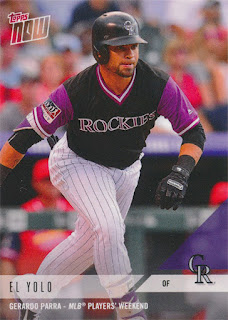 Here is where we jump of the cliff into the void of suck, "El Yolo" is fine, but I really doubt any Rockies fan is excited about a Gerardo Parra card at this point. 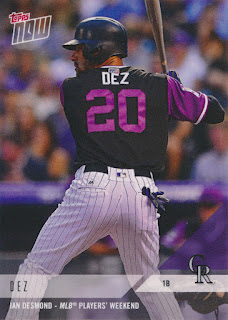 Further into the abyss of suck, Ian "Dez" Desmond, lame nickname, horrible player with a long, unmovable contract, there will be plenty more Desmond cards in my future, I could have been spared this one. 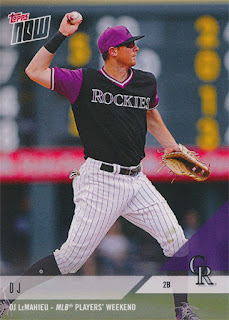 DJ "DJ" LeMahieu, DJ is a good player, All-Star, Gold Glover and batting champ, but really, if you go by DJ, and that is all you can think of to put on your jersey, you shouldn't get a card in this set. It would have at least been a little funny to go with the full "David John". Also the only non-batting card in the set showing of the purple hats, glad there was at least one. 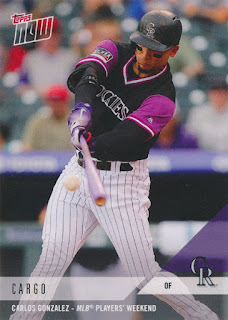 Bonus card number 1, Carlos Gonzalez as CarGo, would have rather he used "Little Pony", he is really a Rockies legend at this point so including him is fine. These ended up with a print run of 16. 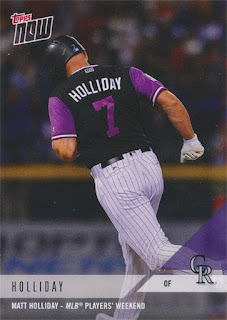 Matt "Holliday" Holliday. In his defense, he just got there, he didn't even have shoes for his first game back, so the had to grab a pair from 2007 in the archives. Just like LeMahieu, no nickname, you don't get a card. Especially went he just got a Topps Now with the Rockies, in these uniforms a few weeks ago. There are only 13 of these, so I am glad I don't have to try and chase one down. 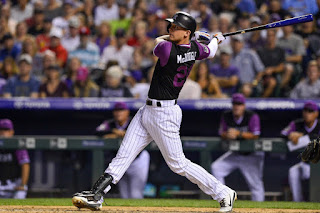 So, after all that, if it were up to me, here is who I would have had. The most obvious omission, Ryan "McDOOGLE" McMahon, the Rockies main rookie card guy this year with a ok nickname, the most obvious choice after Arenado and Blackmon. 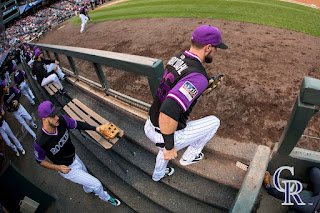 David "Baby Dahl" Dahl would have been ok. 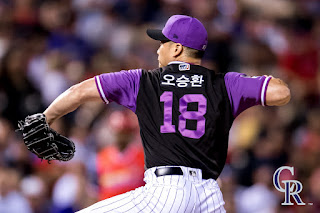 Seung-hwan Oh with "오승환" would have been an awesome card.


Patty "BARRELS" Valaika, not the best player on the team, but probably the best nickname. 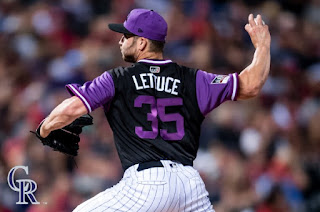