TCDB Trade (aka Tradin' with Canadians)

My first trade with fellow Canuck and big time trader over on TCDB, sandyrusty. Spending some time on the trade/want list is starting to pay off with some bigger trades, and this was one of the bigger ones I have done. Starting with finishing off the 1994 O-Pee-Chee Rockies team set. I didn't even know about this set until a few years ago, nice to have it done.

More OPC, this time finishing off my 1993 Premier team set and a couple cards closer to the 1993 base OPC.

Staying with the OPC theme with some Jim Abbott additions, including a rare pre-interleague American League pitcher batting.

Some Rockies catchers, Danny Sheaffer with a good example of a card back being better than the front, something really lacking in modern cards. You can never have enough Jayhawk Owens cards, Manwaring with a very Stadium Club photo choice and a foily Ben Petrick.

Stadium clubs for the catchers binder. I love that Tackett card, along with Lance Parrish and Pat Borders looking weird with those teams.

If I had to pick ant A.L. team, it would be the A's, Mickey Tettleton was a favorite for his batting stance and Dave Kingman on the very underrated 1986 Flagship. 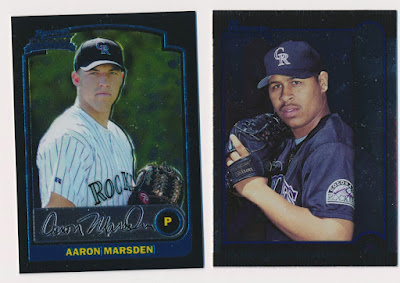 A couple Rockies that never were, Marsden never made it past High A and Jermaine Van Buren who eventually made it to the bigs with the Cubs and Red Sox. 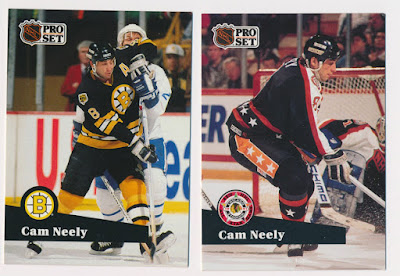 and finally a couple new Neelys. you can't tell by the front, but these are the French version that have eluded me until now.
Posted by Rosenort at 18:21