There were some things sitting in my account that I really wanted in hand (the previously posted Sammy Baugh coming through the mailbox program being the main one) that led to requesting a shipment without a ton of items. Starting off with some shiny gold, inspired by this post on The Collector blog I picked up some gold 2002 Pristine and wow, they are nice. More modern, but just as nice is the Gold Trevor Story from 2017 Stadium Club. 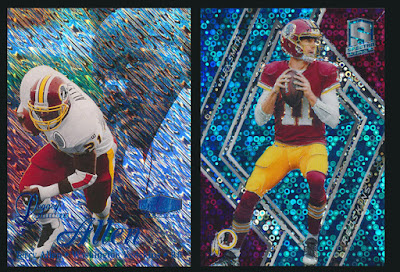 More shiny with a Legacy Collection Terry Allen and 2018 Spectra Alex Smith putting me 4/12 in the hunt for the rainbow. 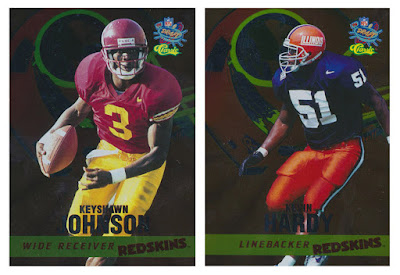 A couple weird ones, remember when Keyshawn Johnson was a Redskin? Classic used to do draft prediction style cards and while neither of these guy played in Washington, I am still counting them as Redskins cards. 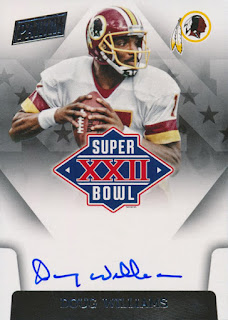 The other card I really wanted in-hand, Super Bowl XXII MVP Doug Williams with an on-card auto from Panini's Super Bowl Signatures set. I have kind of fallen in love with this set so expect to see more of them show up here. 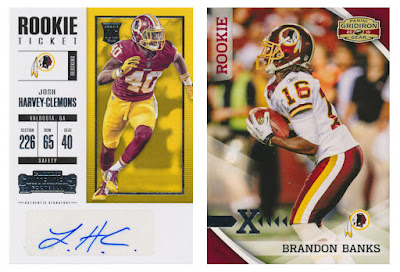 I still dislike sticker autos, but this is Josh Harvey-Clemons only Redskins card so it was a need, along with Brandon Banks who is still in the middle of a pretty good CFL career. my second oldest football card, Al DeMao from 1951 Bowman, it's amazing how nice this card still looks after almost 70 years.