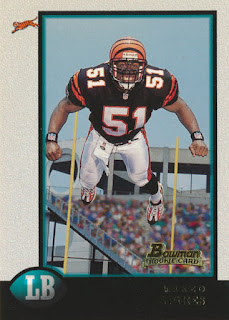 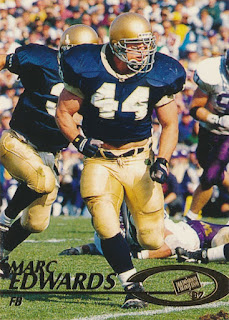 035 - 1997 Press Pass - Marc Edwards:
There was brief period I watched college football, and with Notre Dame always being on TV I watched a lot of their games. I love fullbacks and Marc Edwards was a damn good fullback who put up a respectable 9 year NFL career. 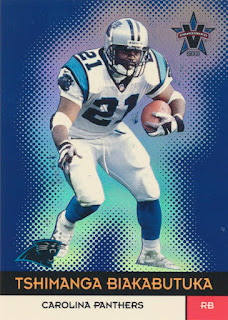 073 - 2000 Pacific Vanguard - Tshimanga Biakabutuka:
I remember this guy being a bigger deal than he actually was, had some big games but could not stay healthy, a name that looks like a cat walked across your keyboard is Frankenset worthy. 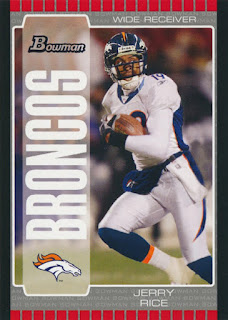 092 - 2005 Bowman - Jerry Rice
Zero year cards of Hall of Famers are automatic entries, Rice signed with the Broncos as a 43 year old and retired rather than sitting at the bottom of the depth chart. 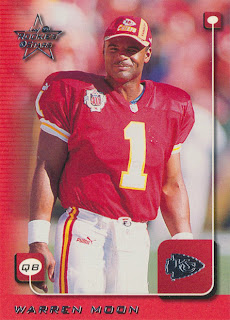 102 - 1999 Rookies and Stars - Warren Moon
Speaking of Hall of Famers with weird teams, Moon spent 1999 and 2000 with the Chiefs, doing mostly what he is pictured on this card doing. He only saw action in 3 games in his 2 seasons in Kansas City, including one very bad start in 2000 against the Ryan Leaf led Chargers. 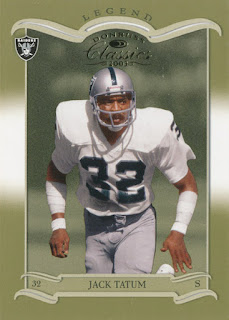 121 - 2003 Donruss Classics - Jack Tatum
Not an easy card to find, I managed to track one down via Sportlots, one of the few modern cards of The Assassin. 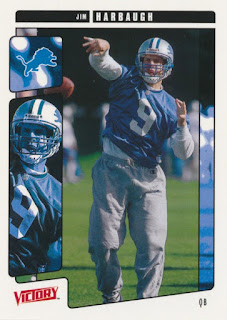 123 - 2001 UD Victory - Jim Harbaugh
Another "Zero year" card, Harbaugh signed with the Lions in 2001, but was cut before the season started, was then signed with the Panthers as a back-up and retired after the season. 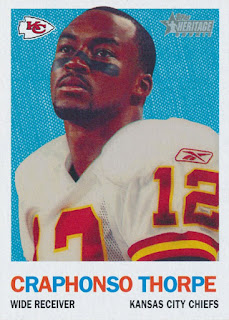 289 - 2005 Heritage - Craphonso Thorpe
His name is Craphonso, that will never stop being funny. 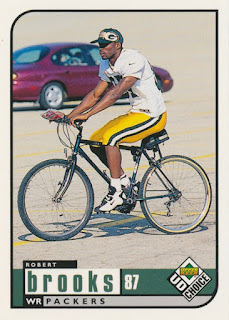 340 - 1998 UD Choice - Robert Brooks
Guy in full gear on a bike with a crappy car in the background, didn't even have to thing twice about this one. 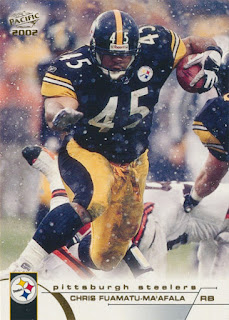 343 - 2002 Pacific - Chris Fuamatu-Ma'afala
Multiple points here, crazy name, fullback, and bad weather game. I believe he has the longest name to be printed on the back of a jersey. 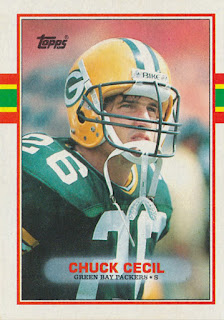 380 - 1989 Topps - Chuck Cecil
Another of my personal favorites, you know you are tough when SI puts you on the cover and asks "Is Chuck Cecil Too Vicious for the NFL?"