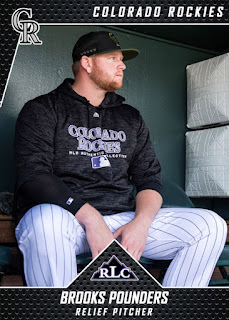 The Player: Aside from having a very cool name, Brooks Pounders is the kind of player this project is meant for, a journeyman middle reliever with much more time in the minors than the majors. Pounders appeared in a career high 14 games with the Rockies in 2018, with a 7.63 ERA, which was actually the best of his career. He is currently with the Indians Triple-A team and to date has a 3-2 record in 38 career MLB games with the Royals, Angels and Rockies from 2016-2018.

The Card: An original design that took a few forms before this one, I have to say I am pretty happy with it will be using it again as well as a horizontal version.

The Project: The Project: Rockies Legacy Collection custom project to make digital cards of Rockies players who never had one issued.
Posted by Rosenort at 20:49