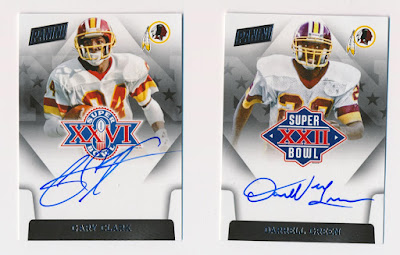 By far, my most exciting packages are from COMC. Months of collecting all wrapped into one big parcel to open, scan and sort. I have been going for quality over quantity, so not a lot in terms of volume but some really nice stuff, including the 2 above Super Bowl Signatures. These two of Gary Clark and Darrell Green put me up to 5 out of 8 Redskins, with the search continuing for Charles Mann (a cheap one at at least), Joe Theismann and John Riggins. Another big card, 1997 Metal Universe Precious Metal Gems, which I believe moves into third place on the most I have ever spent on a football card list. Beautiful card in hand. 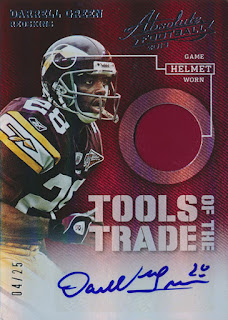 Another splurge, but one I feel I got a good deal on, even though it is a sticker auto, the helmet relic and the Spear throwback jersey make it a pretty sweet card. 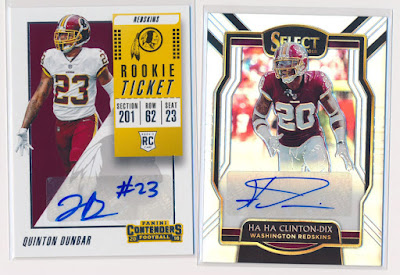 More ugly stickers, but being the only Dunbar and Clinton-Dix Redskins cards, these were mandatory for the "One of Every Redskin" collection.

and the last auto, Devin Thomas on a weird slide out jersey thing, more for the novelty that anything. 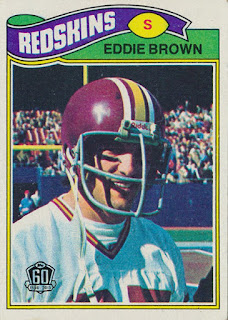 While not being a huge buyback fan, I picked this up to add the rainbow this the regular Topps and my White Whale 1977 Mexican Eddie Brown. 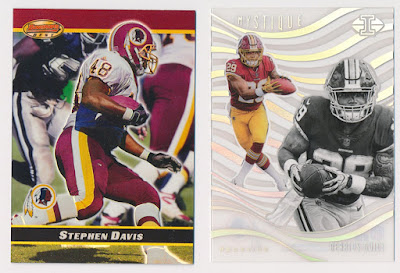 Some new acetate pickups with fellow running back Stephen Davis on Derrius Guice. I love the 2000 Bowman's Best acetate parallels. 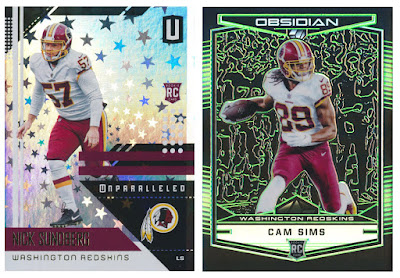 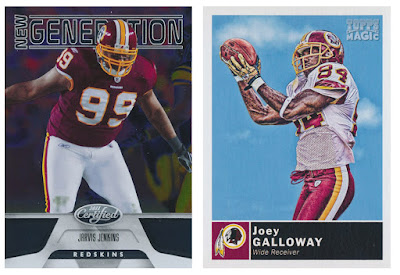 A couple more One of Every Redskins with a weird Topps Magic short print of short term stop Joey Galloway who played in 10 games for the Redskins in his final NFL season.

Some shiny QBs who made there names with other teams, three great looking cards that scan don't do justice. 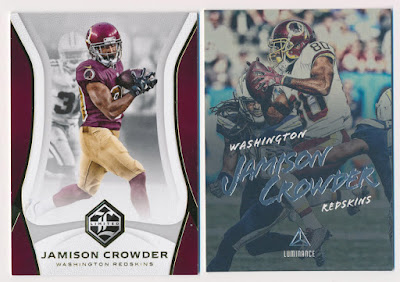 A couple Jamison Crowder pick-ups, including a Panini Limited in the throwbacks that currently fills card #100 in the Football Frankenset. 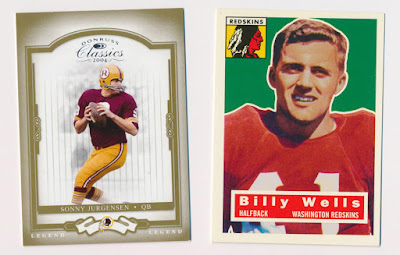 Another Frankenset card with Sonny Jurgensen in a rare shot of the Redskins Vince Lombardi era helmets and Billy Wells from the 1994 reprint of the 1956 Topps set.

Finished of with a sweet Dufex Reggie Brooks in the 1994 throwbacks, Mike Sellers, a pre-color rush all burgundy Taylor Jacobs and a Josh Norman XR in a rare case when I got the 1/1 parallel before the base card.