The Rockies collection has been largely ignored in favor of the Football Frankenset and the start of the One of Every Bruins project, but this trade scratches the baseball itch before 2020 gets in full swing. Starting with a oddly yellow tinted Vinny Castilla, which is something that I have been on other acetate cards but not very often, along with the Big Cat in a warm-up jacket and a zero-year Rudy Seanez from a non-Topps OPC design.

Some shiny mid 90's Rockies along with Sal Fasano trying poorly to pass for Livian Hernandez.

Some early 2000's Rockies who were all probably better known with other teams in Masato Yoshii, Juan Pierre, Mike Lansing and Jeffery Hammonds.

Yoshii fits into the weird Rockies I over-collect along side Trenidad Hubbard, Angel Echevarria and Jayhawk Owens.

Some recent releases with a set that that is largely know for low budget, but should be more know for great photo choices in Big League and Trevor Story on Bowman Platinum.

Some football with Adrian Peterson sandwiched by some Frankenset cards that didn't make the cut with a zero year Antonio Brown and Kirk Cousins sporting a throwback uni. 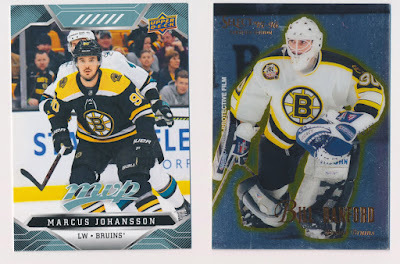