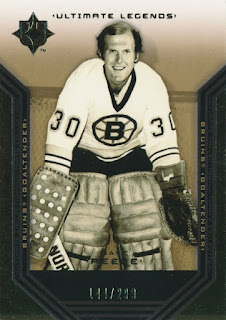 A couple singles from everyone's favorite auction site starting with a very weird pick-up, 2004 Upper Deck Ultimate Collection has 84 cards in the set, and one of them is a goalie who played in 14 career games 30 years previous. Dave Reece did record two shutouts in those games, but he is most famous for his last NHL game in which he gave up 11 goals including 10 points to Darryl Sittler. So 3 nearly 3 decades later, Dave Reece gets his rookie card. 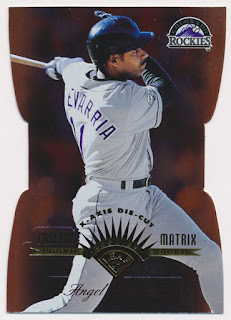 The other being a Leaf Fractal Matrix Die-Cut of the recently passed Angel Echevarria. Never a full timer in Colorado, but will always have a place in my collection.