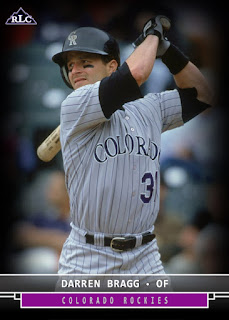 Darren Bragg was more or less the typical journey-man outfielder, playing on 9 teams over 11 seasons from 1994-2004. The best years of his career came in Boston, setting career highs in pretty much everything between 1997 and 1998. He signed with the Rockies in February of 2000 and played in 71 games before being granted Free Agency in July of that year. From there he bounced to the Mets, Yankees, Braves, Padres and finally Reds.

The Card: Started with the Panini flagship design from 2019 Chronicles football, and morphed a little bit, the feathered edges almost give it a high-end product kind of feel.