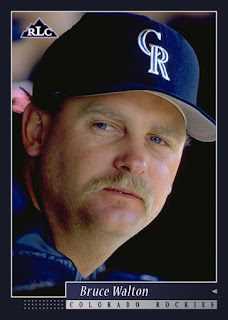 Bruce Walton only pitched in 27 career games over 4 seasons with a 8.21 ERA, but he did finish with a perfect 2-0 record. After spending 1991-92 with Oakland and 1993 with Montreal, he would play his final 4 MLB games with Colorado in 1994. The highlight of that season would be in his final MLB game, July 4th, 1994, blanking the Cubs in the 13th & 14th innings, earning the win in a 4-2 Rockies victory.
1994 Score has been lost & buried in the heart of the junk wax era, but it actually has a decent design, (and some good photos, check Roberto Alomar, Jose Canseco & Wade Boggs) and the color scheme really fits with the Rockies.
Link to project
Posted by Rosenort at 18:07