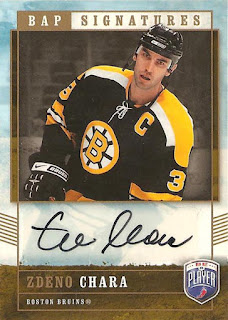 In honor of hockey being back here is another 2010-11 Stanley Cup Champion team autograph, this time the Captain from the 2006-07 Be A Player Signatures set. This one is a part of the COMC mail-day and was just waiting for a reason to be posted, with the NHL coming back now seemed like a good time for a hockey post.

One of the league's elite defense men, Chara won the 2009 Norris trophy and was a finalist in 2011 and 2012. In the Bruins Championship season he lead the NHL in regular season Plus/Minus with +33 and in playoff with a +16 rating.
Posted by Rosenort at 10:45