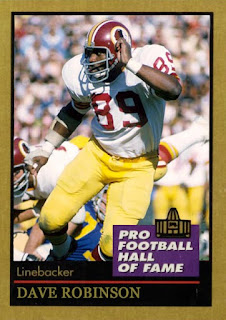 One of the newest members of the Hall of Fame, Dave Robinson is best known for his seasons in Green Bay, but Robinson did end his career with two seasons with the Redskins under Hall of Fame coach George Allen. Robinson did get two cards with Washington including a 1975 Topps card that is among my favorite vintage Redskins cards.

I was always a fan of this set and wish they would bring it back or at least update the new players every year. A very simple classy design that I have wanted to make a custom of for a while and now found an excuse.
Posted by Rosenort at 10:57