A new trade with Kyle D bringing some high priority wants my way. 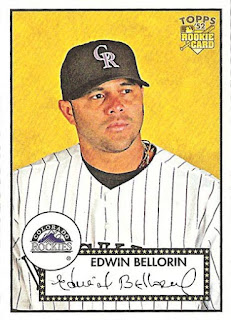 Edwin Bellorin was need for the "One of Every Rockie" collection and the last catcher I needed. One of the few players with only one card with the Rockies, no other sets, no parallels, no inserts, just this one card. I remember Bellorin for having big numbers in the hitting paradise that is AAA Colorado Springs, then in his first major league at bat in his first major league start, pulled a hamstring running out a grounder and was sent to the disabled list. He did return to the Rockies playing in 8 games, starting 2, from 2007-2009.

The trade was started with Kyle finishing off my 1992 Pinnacle series one set, I am not a big set guy, but it's nice to have this done over 20 years after I bought a bunch of packs. As much as I love the 92 design, those Shades cards are so terrible I almost didn't put them in the set binder. 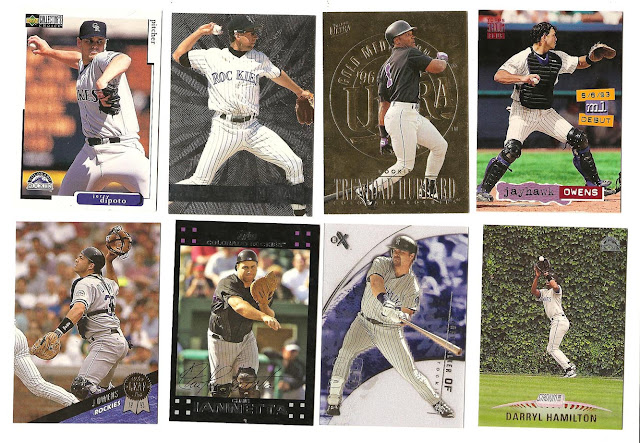 Some Rockies from my youth, Current Angels GM Jerry DiPoto who was the Rockies closer in 1997 and 1998, the Metal Weiss is a Platinum parallel and I will always take Trenidad Hubbard, Jayhawk Owens and Chris Iannetta cards. Larry Walker is an acetate card from the 2002 Fleer E-X set. A nice shot of Darryl Hamilton in front of the Wrigley ivy from 1999 Stadium Club, another personal favorite set. 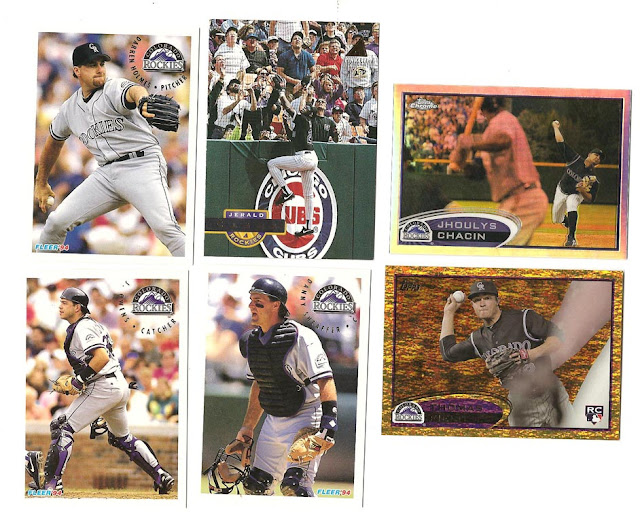 Finished off with some 1994 Fleer and a Thomas Field for the "One of Every Rockies" project. I am not a chrome fan, but I picked up a Jhoulys Chacin 2012 Chrome printing plate a few weeks ago so having a card from the set is cool. Thanks for the trade!
Posted by Rosenort at 10:43