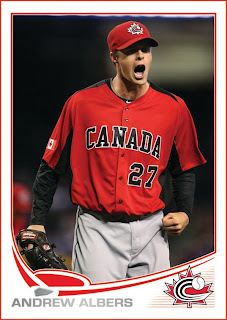 It took over 20 years and a strange path, but Saskatchewan has a representative in major league baseball again. Andrew Albers make his debut last night, becoming the 8th Saskatchewan born player, and the first since Terry Puhl retired in 1991, to play in the majors. Albers came within two outs of a complete game shut-out, pitching 8 1/3 scoreless innings before being removed after 109 pitches, winning his MLB debut 7-0 against the Royals. He becomes the first Saskatchewan born player to win a MLB game since Reggie Cleveland in 1981.

Albers, a 27 year old native of North Battleford, was drafted out of high school by the Brewers in 2004, but chose to attend the University of Kentucky, and was then drafted by the Padres in 2008. He was assigned to the Rookie class AZL Padres and pitched in 5 games in 2008, but then missed all of 2009 with Tommy John surgery and was released. The comeback trail started in 2010 with Quebec of the independent Canadian-American Association, going 3-0 with a 1.40 ERA and 17 saves over 40 games. The Twins signed him as a minor league free-agent in 2011 and Albers moved through the system quickly, and was converted to a starter in 2012 with the AA New Britain Rock Cats. He would be named to Team Canada in the 2013 World Baseball Classic and then the AAA All-Star team before making his MLB debut.
Posted by Rosenort at 11:50