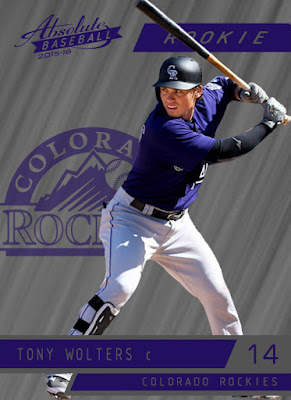 Once a staple of this blog and looking back, something I am pretty proud of is custom cards. It has been over a year since I posted one and I finally found a couple reasons to start messing around. First was the 2015-16 Panini Absolute Basketball set. I have yet to actual hold some in my hands, but I have a few in my COMC account waiting to get shipped out, but based on the scans I really like the design. Whenever I see a nice Panini design I wonder what it would look like as a baseball card, and this one worked pretty well. I made a few adjustments as foil doesn't really scan well or lend itself to digital designs that well. I also lightened it up and put more of a focus on the brushed metal background. I really like how this one turned out. The other inspiration was Rockies rookie catcher Tony Wolters. A 24 year old middle infielder turned catcher, Wolters was claimed from the Indians and was a surprise addition to the opening day roster. He has earned rave reviews behind the plate and has been a nice change from the mess of catchers the Rockies have employed recently. I noticed he was not in Topps Series 2, but there is still hope for update, or maybe he will do something special enough to get on a Topps Now card, but for now, this will have to do.
Posted by Rosenort at 20:54