Catching up on some scanning: Rockies

A few scans that have been hanging out in my "to be posted" folder to fill up some otherwise dead time on the blog. I think most of these come from a COMC order featuring some cheap autographs of guys you have never heard. Kyle Parker is part of the Rockies affinity towards drafting college quarterbacks along with Todd Helton, Seth Smith, Russel Wilson and possibly more I am forgetting. The three auto's start with Darren Clarke, who pitched in 1 1/3 career innings over 2 games in 2007 as an emergency call up from Double-A Tulsa. Derrick Gibson was a big home run hitter in the minors, but only managed to play 17 career MLB games, all with the Rockies. 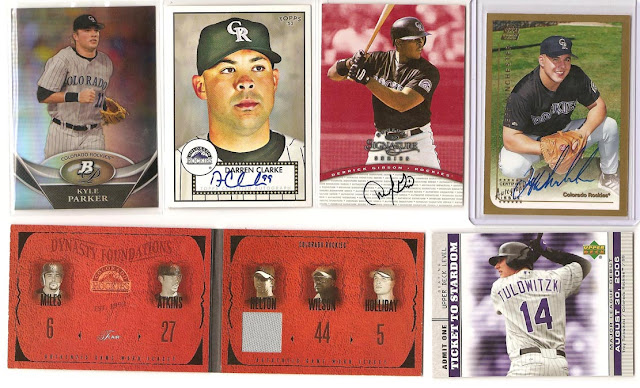 Jeff Winchester is the only catcher drafted in the first round in Rockies history, but he never made it passed Double-A in 9 minor league seasons. The bottom left is my first booklet card, kind of a boring card with a plain grey "game used" piece of Helton's uniform, but for under $4 I jumped on it. Finished off by a Tulowitzki prominently showing the number 14 he wore as a rookie.
Posted by Rosenort at 12:02