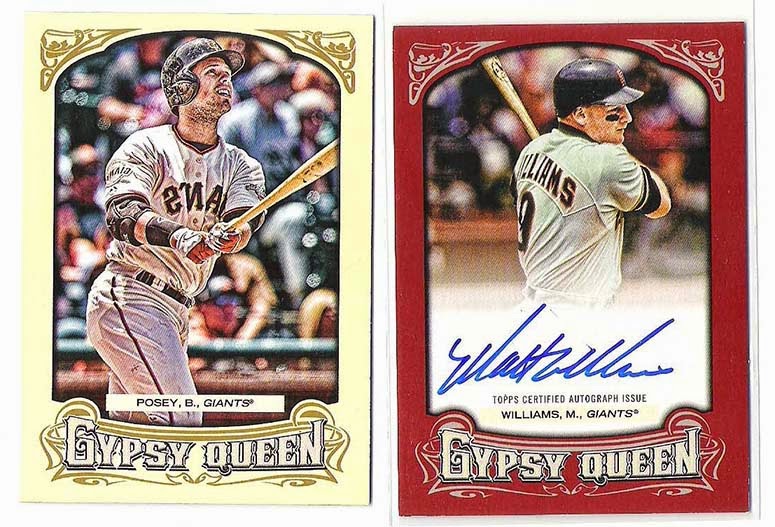 While the second box was not nearly as exciting as the first box, it was still pretty good making for a really fun two box break. The highlights being a Buster Posey reverse negative card and a Matt Williams red autograph numbered to 49.

Once the second box is cracked, it gets hard to keep track of what came out of where so I won't get into as much detail as the first box. These rest of my hits are above.

Base Cards: Two boxes combined left me 4 cards short of the base 300 card set, much closer than two boxes of 2012 or 2013 did. While the first box had perfect collation, the second box had two doubles, the total leaving me with 61 dupes.

Short Prints: Counting the Buster Posey reverse negative card I got the estimated 12 SP's. I still haven't finished 2013 so I don't imagine I will finish these soon, especially needing Tanaka and Abreu.

Minis: By my count I got 36 regular minis, 4 short prints, 5 mini black and 1 sepia. This doesn't add up to 48 so my count is off a little, but the serial numbered amount is correct.

Inserts: A good stack of inserts, I got a couple keepers in the Carl Crawford Glove Stories and a Jose Fernandez, but nothing jumps out at me as an insert set I want to build.

Hits: Not much needs to be said here, a printing plate as an extra hit, a huge pull in a dual button relic and a serial numbered autograph. The rest weren't big names, but they all can't be Babe Ruth.
I think these boxes rank 1 and 2 in the last 4 years since I returned to collecting, and as a huge Gypsy Queen fanboy, I really enjoyed these.
Posted by Rosenort at 13:00