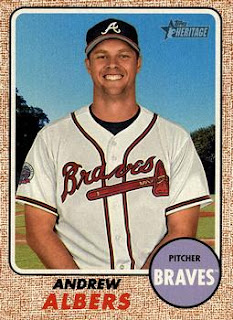 P-Town Tom is doing a neat thing over at Waitin' Til Next Year that most I wanted to take part in, your favorite card of 2017. It took some thought, but I came up with it, it was the obvious choice, not really a close second even. 2017 Topps High Number Heritage Andrew Albers. Not a team I collect, or a set for that matter, one of the very few Saskatchewan MLB players, and the only one born in the same town that I was.

Albers' BBref page is interesting to say the least. Starting in rookie ball in 2008 with the Padres organization, then missing all of 2009. 2010 being spent with the Les Capitales de Quebec of the independent Canadian-American Association, going 3-0 with 17 saves and a 1.40 ERA. This earned him a spot in the Twins system in 2011 and finally his MLB debut in 2013.

The 27 year old rookie pitched 8-1/3 shutout innings in his debut, then a complete game shutout in his second start. This probably would have earned him a Topps Now card, had they existed back then. The rest of the year was no so great, finishing 2-5 with a 4.05 ERA. From there, 2014 was spent in Korea with the Hanwha Eagles, then a return to North America in 2015 with Toronto's Triple-A team in Buffalo, and a one game cameo with the Blue Jays.

2016 marked a return to the Twins system, including a 6 game stop with the big club. 2017 was a career resurgence, back in Triple-A with the Gwinnett Braves, Albers went 12-3 with a 2.61 ERA looking like a lock to earn a call-up. Instead a trade to the Mariners, and a call-up there going 5-1 with a save over 9 games.

Also in 2017, his first MLB cardboard appearance, with the Braves, a zero-year card as he never actually pitched for them.

Recently the Mariners released Albers so he could sign with in Japan with the Orix Buffaloes.

A "Who is this guy?" card for most people, but a pretty cool card for a Saskatchewan baseball fan.
Posted by Rosenort at 18:01