The second of two packages from friends in the Great White North. Coming from Sportscards From The Dollar Store, one of the more prolific package senders around. After my King-less packs of Hoops these are much appreciated, especially the Frank Mason III card, I am still a little leary of "The 3rds" one teams I like, but this guy seems pretty good so far. 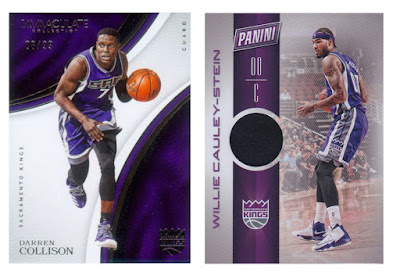 Some super thick cards in the way of Darren Collison Immaculate and Willie Cauley-Stein from something called Panini Day. Beautiful cards, but I will always question the decision to have Darren Collison in a high end set like Immaculate.

Some new Rockies, including a really nice Blue Rookie Cup Arenado from Opening Day and a Bowman mini of Brad Hawpe that I have never seen before, and everyone's favorite purple dinosaur, Dinger.

finishing off with some Redskins from Strata, really nice cards, with a appearance from not my favorite "The 3rd" of all time.

Thanks for the cards, I am already working on a return package.