You knew it was coming after the NBA post, my COMC Rockies package with a mix of the mailbox service cards, Spring cleaning sale, a random stuff I have bought over the last few months. Starting off with 3 different (I assure you they are different) Jonathan Lucroy cards from 2018 Heritage. We have the 100th Anniversary, the Flip Stock and the Red Back. I just need the Black border and the base for the rainbow. Despite playing in 46 games with the Rockies in 2017, this as a photoshop from his Rangers days. The beard is a dead giveaway.Also Despite being in Oakland all year, Lucroy is listed on the Series 2 checklist with the Rockies.

After the boring Heritage parallels, here is some Shiny Goodness. These 1998 Flair Showcase Row 0 are among my favorite cards ever, the only problem with these is they are the "Backdoored" versions that I didn't know enough to look for the differences. Still look awesome though. 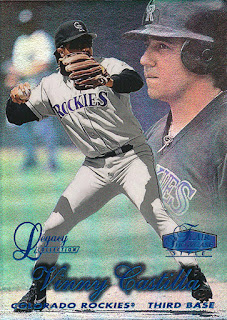 This Vinny is actually a legit copy of a Legacy Collection parallel from the set above. 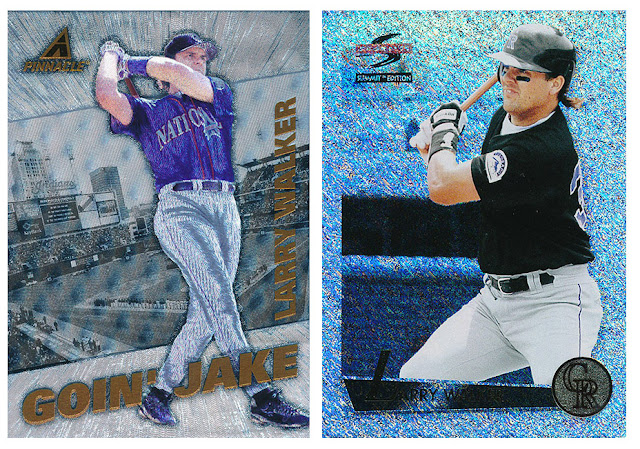 More Shiny with some Larry Walker Dufex action on 1998 Pinnacle and some super shiny from 1995 Summit. 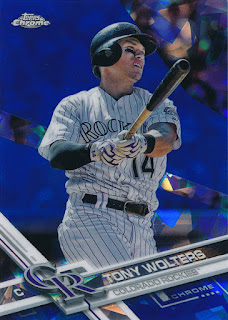 Look at the Larry Walkers above, then look at this, the giant spike background of 2017 is something that baffles me. It's stuff like this that drive back into the 90's and into Basketball. 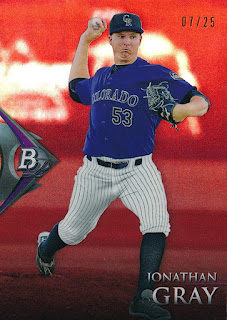 2014 Bowman Platinum was probably the last time Topps really nailed parallels, the camo's from this year are amazing and this red out of 25 is pretty. 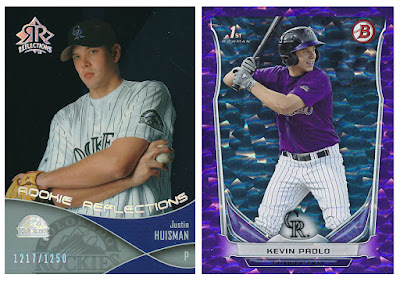 Bowman always has some parallel gems hidden in the mass they put out, this Purple Ice from 2014 Bowman is pretty great, it scanned ok, but in hand it is great. Huisman joins Padlo in the "Rockies that Never Were" collection. 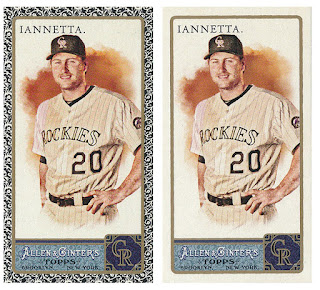 2011 is by far my favorite year of Ginter, and the only year Iannetta was in. No more Gypsy Queen has pushed me into past years of Ginter, that;s how bad it has gotten. 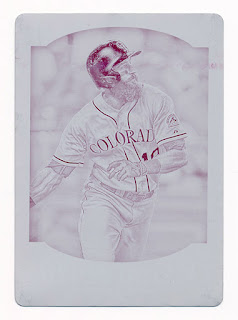 I don't actively hunt printing plates anymore, but I already had the Black 1/1 and the Cyan plate, so it made sense to pick up the Magenta one. 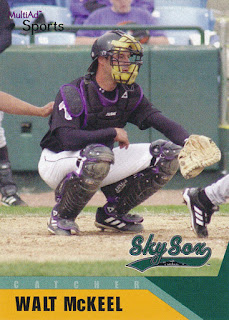 Walt Mckeel played in 5 games for the Rockies in 2002, and I can't find a decent picture of him, so this minor league card will have to do for the RLC Project for now. 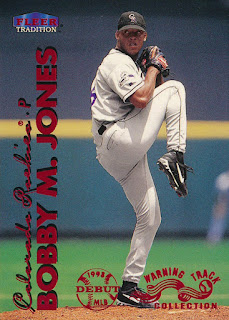 Bobby Jones (not that Bobby Jones) fits into the obscure Rockies collection, not a guy with a lot of cardboard options, but I will jump on any cards of his I don't already have. 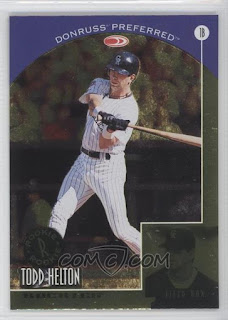 Finally, a 1998 Donruss Preferred of Todd Helton, which even my new scanner didn't like, so here is the COMC scan.