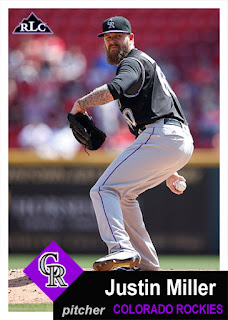 The Player: I was alway surprised Justin Miller never got a card with the Rockies. In fact, as far as I can tell, he has no MLB cards, no Bowman prospects, no nothing. After pitching in 8 games as a rookie with the Tigers in 2014, Miller pitched in 34 games with the Rockies in 2015, going 3-3 with 1 save and a 4.05 ERA, good for a 115 ERA+, which is outstanding for a Rockies reliever. His 2016 was not as strong, but still passable. His 2017 was spend in Triple-A, but he returned to the majors in 2018 with the Nationals, and has an impressive 4-0 record over only 10 games so far, but a far less impressive beard.

The Card: 1953 Topps is a classic design, that I feel still holds up well. Topps obviously agrees with 53 getting some love in the 2016 Archives release, then being the base for the new, and very popular, Living Set.