Back to the 1971 Variation project that I have ignoring for a bit, here we have card number 306, Jim Nash. Similar to the Jim Northrup variation this card has a Blob and Blobless version, but from what I can find the Blobbed version is the original with the later versions having the Blob airbrushed out. The difference is noted on most graded versions as "Black Blob, Left Center" and "Blob Airbrushed Away", although there are graded cards with no notation at all. The Blobbed version seeming to be a little more rare and more expensive, going for around 10-20 dollars ungraded, while the unblobbed version goes for around 1-2 dollars. I have seen mention of a version with a red dot on his cap, but that seems like more of a printing error than a variation. 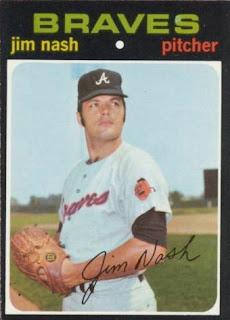 Nash pitched for 7 seasons in the majors, his first 4 seasons with the A's, then the next two with Atlanta before splitting the 1972 season between the Braves and Phillies. He finished second in the 1966 AL Rookie of the Year voting going an impressive 12-1 with a 2.06 ERA, and won at least 12 games in 4 of his first 5 seasons. He finished his career with a 68-64 record and a 3.58 ERA over 201 games.

Also a quick thanks to moremonkeys138 of Crinkly Wrappers for mentioning this blog in his blog, thanks for reading. And as always if anyone has more information on any of these variations let me know and I will update the post about that card.
Posted by Rosenort at 14:30