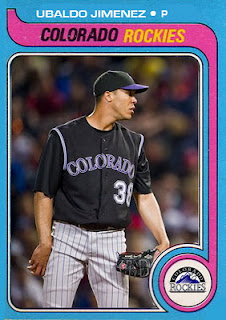 This is one of my first customs from years back I found in a folder based on the 1979-80 Hockey set. A little twist on the old Hockey cards I grew up with here in The Great White North. This is the set featuring the Gretzky rookie card so the design may look familiar to non hockey collectors. This one was a little easier because there actually was a Colorado Rockies in the NHL at this time to I left the team name alone. I probably made this early in Ubaldo's dominant 2010 season. I still don't think Jimenez was ever truly healthy in 2011 and I really hope he has a good year with the Indians (and that the terrible Jim Tracy didn't ruin his arm).
Posted by Rosenort at 07:16