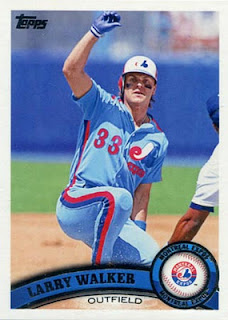 Growing up in Canada and being a baseball fan I was always a big Larry Walker fan, and still am. His move to Denver in 1995 and the fact that we could watch Rockies games on the satellite but could not find Expos games is what made me a Rockies fan. For my birthday this year I received a sweet Larry Walker powder blue replica jersey like the one pictured on the card to the right, a short print retired variant from this years Topps update (I miss the Expos). So obviously I was very disappointed, but not surprised when Mr. Walker was not selected to the Hall of Fame this year. This brings up a conflicting idea for me, I like the fact the Baseball HOF is hard to get in to, but dislike it when deserving players get overlooked. The most disappointing part is how overlooked Larry Walker was.
He was a true 5-tool player, he really had all you could ask for in a baseball player, but ending up with the 9th most votes this year, behind players like Fred McGriff, Tim Raines, Alan Trammell and Edgar Martinez, all good players in there own right, but not as complete and versatile as Walker in his prime. Seriously a guy with 3 Batting Titles, 1 MVP, 7 Gold Gloves and a Home Run Title only gets 22.9% of the vote. His career was slowed by injuries, and he played in pre-humidor Coors Field, but can you really hold that against him? I just hope within the next few years with all the steroid era players coming up people start looking at guys like Larry Walker a little closer and give him a few votes, he deserves to be in and should not have to wait for a "veterans committee" induction like Ron Santo.

Other former Rockies included 2 time NL MVP Dale Murphy hanging around for the 14th year with 14.5% of the vote. Murphy look to be a eventual Veterans Committee Inductee. Vinny Castilla got 6 votes for (1%) removing him from next years ballot, but it was nice to see him get a couple votes at least. Eric Young got one single vote and somewhat obscure former Rockies Jeromy Burnitz and Tony Womack got the same amount of votes as I did, zero.

Also congrats to Barry Larkin, he deserves to be in the Hall (even though he didn't deserve the 1995 MVP over Dante Bichette). Larkin was a great player at what I fell is the hardest position to play and is a great addition to the Hall of Fame.
Posted by Rosenort at 11:28