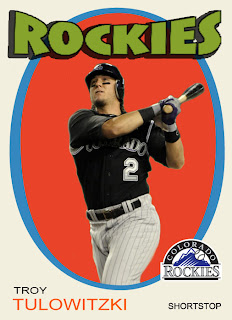 Although this Blog is relatively new, I have been making custom cards for a few years now, and this was one of the most challenging. The team font at the top is not perfect compared to the original 1971-72's, but I think its pretty close, and cropping players is never a fun task, but the final product makes it worth the time. The 1971-72 set featured the iconic Ken Dryden rookie card, even as a Bruins fan, I have to admit that Dryden card is brilliant, and sticks out as the only action photo in the set (as far as I know anyway). The original set had both red/orange and yellow background, this was originally a Bobby Orr card and I think the orange looks sharper. Overall a nice design for a card that just screams 1970's with the bubble font and bright color. 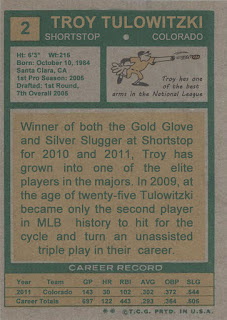 For the back I used the Topps version instead of O-Pee-Chee, mostly because I don't know french. I stole the cartoon from a 1973 Cesar Geronimo and tried to match the font as best I could. I am pretty proud of how the back turned out, and left it off-center to keep that vintage feel.